Anne Erin "Annie" Clark better known by her stage name St. Vincent, is an American musician, singer-songwriter, and multi-instrumentalist. After studying at Berklee College of Music for three years, she began her music career as a member of the Polyphonic Spree. Clark was also a member of Sufjan Stevens's touring band before forming her own band in 2006.

St. Vincent's work has received consistent praise for its distinct musical style, which blends soft rock, experimental rock, electropop, and jazz influences. Her debut album was Marry Me (2007), followed by Actor (2009) and Strange Mercy (2011). She released a collaborative album with David Byrne in 2012 titled Love This Giant. Clark also contributed backing vocals for Swans on their 2014 album, To Be Kind. Her fourth solo album, self-titled St. Vincent, was released on February 25, 2014 and was named album of the year by The Guardian, Entertainment Weekly, NME, and Slant Magazine, as well as second best album of the year by Time magazine. The album won her a Grammy for Best Alternative Album, her first Grammy award. She was the first woman in 20 years to win a Grammy in that category.

St. Vincent has opened shows for such acts as The Black Keys, Arcade Fire, Andrew Bird, The National, Jolie Holland, John Vanderslice, Xiu Xiu, Death Cab for Cutie, Cristina Donà, and Grizzly Bear. Additionally, her track "The Strangers" was sampled by Kid Cudi on the song "MANIAC" for his 2010 album Man on the Moon II: The Legend of Mr. Rager. In 2015, she performed with Wire in Chicago, as part of the band's Drill Festival. Clark has been heralded as "one of the past decade's most distinct and innovative guitarists." 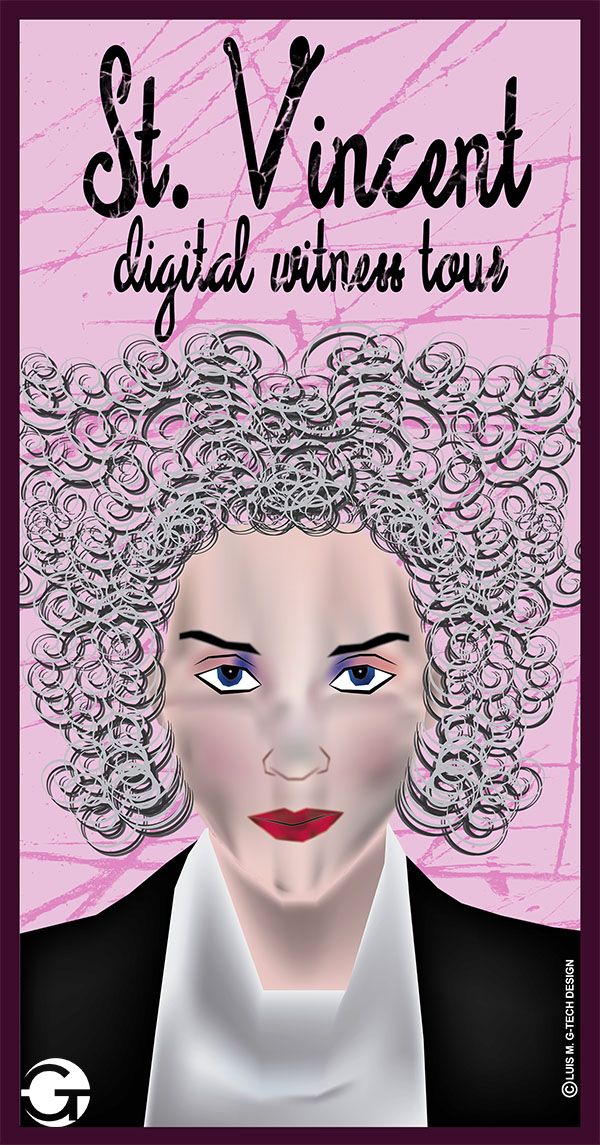 This is an example of poster design and Illustration we developed at G-Tech Design.

This is an example of poster design we developed at G-Tech Design. For more examples check out ourPortfolio